For the Love of Opera: The Life and Work of Tenor Fabio Armiliato | Camerata Bardi Vocal Academy

For the Love of Opera: The Life and Work of Tenor Fabio Armiliato 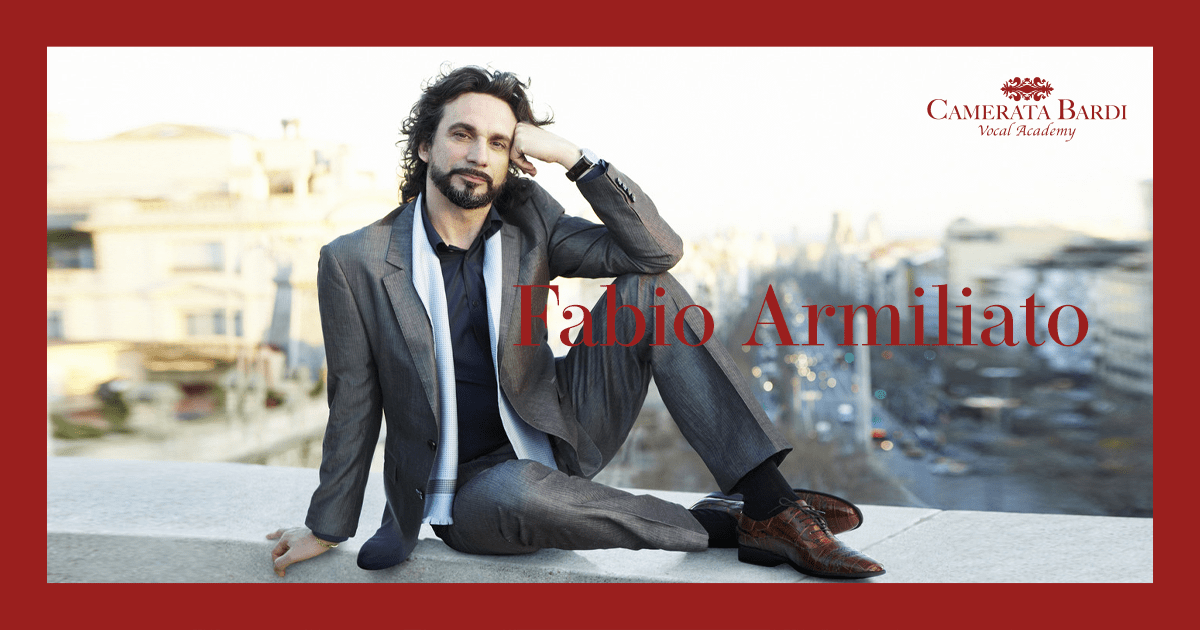 When Tenor Fabio Armiliato went to the Teatro Margherita for the first time in Genoa, his hometown in the north-eastern part of Italy, he was just a young kid. «I live that moment like it was yesterday,» he recalls of the first Opera he attended. He remembers «seeing the spectrum of lights going down and the sounds of the orchestra rising.» He also bears in mind, «the moment of silence before the beautiful storm of the music starts.» But above all, it was the feeling emerging from him that is impossible to forget, still today. «You discover within yourself for the first time a sort of fullness that you are going to feel forever. It is the same taste over the years, but always a bit different in every performance» Tenor Armiliato said.

Decades after that evening, he has spent his life singing, absorbed by music, by arts. After he finished his studies at the "Niccolò Paganini" Conservatory of Genoa, he started his career. He was very young when he made his debut as Gabriele Adorno in Simone Boccanegra, in Genoa. «I was lucky enough to be born in a historical period where families wanted to be families and were willing to infuse values to generations to come,» he said. «You could touch the motivation to build and the decision to look at the future with hope.» Something that the tenor said he is not finding any more. In 1995, Fabio Armiliato made his debut at the Teatro alla Scala in Milan, with Boito's Mefistofele directed by Riccardo Muti. Then, he sang in all the most important theaters in the world, such as the Opéra de Paris, the San Francisco Opera, the Opera in Chicago, the Teatro Real in Madrid, the Liceu in Barcelona, and the Royal Opera House in London. «The journey was so long and complex to get there, but I always did it with passion,» Tenor Armiliato recalled with a smile from his apartment in Genoa.

The 1990s are important to him because of a city and a person, above all. The city is New York. The person is one of his most estimable teachers, Italian tenor Franco Corelli. But it is the moment he met Italian tenor Giovanni Consiglio that his path developed altogether. «Giovanni was a wonderful friend and an astonishing human being,» Armiliato said. With him, he prepared many parts he was going to sing, above all the Fedora at The Metropolitan Opera. «Giovanni was a very positive man, optimistic, bright, always in love with opera and Belcanto,» Armiliato remembers him. Consiglio always believed that passion, the technical studies, and the training are even more important than the voice itself. «He used to tell me, "Fabio, voice is a means to ensure that your personality and interpretation can emerge on the scene," he was right.» Opera and Belcanto are two other means to deliver feelings and sensations. Recitar Cantando - Acting while Singing, literally - is a way to send a message of love.

Love is always the bridge between the voice and the score. And then, between the notes of instruments, and the ear of the audience. Love is also what enriched Armiliato's personal life after he met in 2001 Daniela Dessì, an Italian Soprano from Genoa who had an extraordinary career. She sang everywhere, especially in Italy and Europe. She performed Tosca in Florence, Adriana Lecouvreur in Palermo, Puccini's La Fanciulla del West in Seville, Madama Butterfly in Hannover and Aida in Verona, and Cagliari. She also opened the season at Teatro La Scala in Milan, in January 2009. They performed many times together, too. Armiliato and Dessì were partners for fifteen years, until August 2016, when she died of colon cancer at the age of 59. «I am grateful for the years we have spent,» Armiliato said. «Even if it was unfair for the world that she left it so early, I tried to be happy for what we experienced together, and not angry for the future we could not have.»

And for the future, despite the coronavirus pandemic having strongly stressed the Opera's world, and with theatres remaining closed in many parts of the world, Armiliato has both hopes and confidence. «What I see is a wave of new young singers, and a new type of young audience who want to reappropriate Opera," he said. When the big cities, and the countries recover from the side effects of the pandemic, and start rebuilding, they will need Opera. «But we have to stop thinking about the foundations as they were for-profit companies and the theatres like they were offices," this is his warning. Theatres and Opera have to feed young generations, encourage education, implement knowledge. For all of these reasons, Armiliato said, «I know for sure that Opera will never die.»