The story of Enrico Mattei founder of ENI 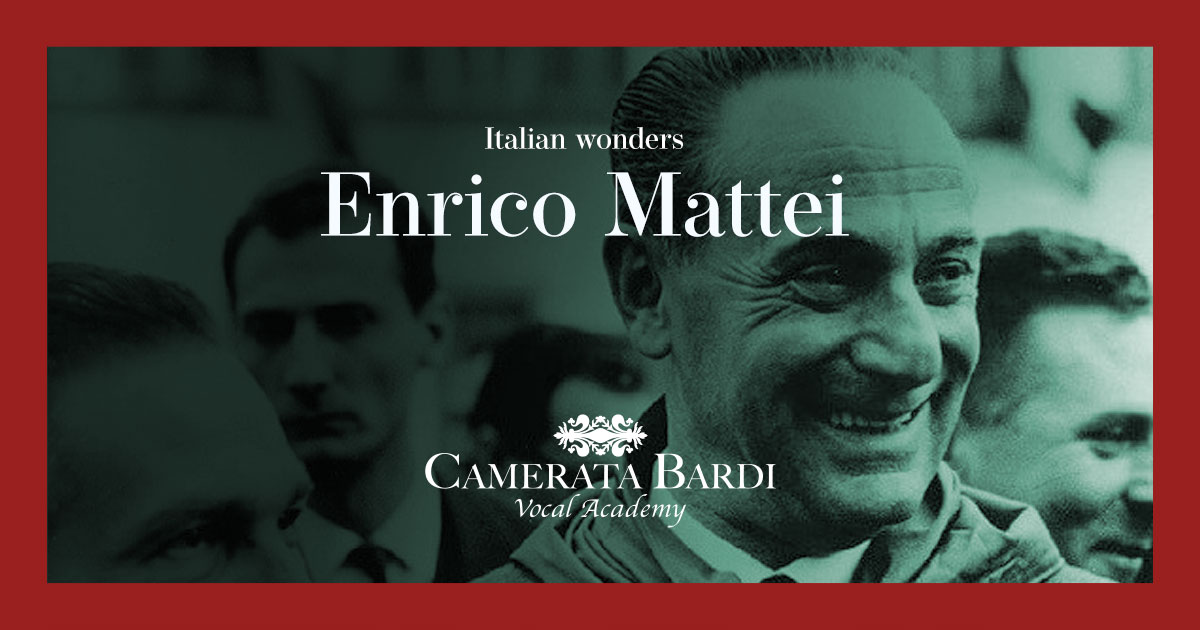 Italy is the most beautiful country in the world. And one of the figures that most represent its flair, genius and qualities is Enrico Mattei, founder of ENI, a protagonist of contemporary Italian history and of the post-war economic miracle that stands among the main proponents of reconstruction.

Mattei emerges for courage, genius, spirit of initiative, confidence in the possibilities of Italians, constant parameter of all his actions. Starting from my region, the Marches, I met friend and Mattei's great-grandson, Aroldo Curzi Mattei.

Aroldo is an entrepreneur, who since the beginning of his career has followed the companies of his family. He then created his own clothing brand with which he achieved important goals in the markets of Russia, the United States, South America, Japan, and Italy.

After an intense period as an oil broker, he put his experience and important relationships to good use by founding a company, in partnership with one of the world's leading oil and gas trading companies, achieving important milestones. He concentrates his business in the the Middle East and South America which led him to dialogue with the highest institutional offices of many states and within the private oil industry.

He represents and coordinates with Explorar Group, a General Contractor in the international arena, some of the largest Italian and international companies in the field of energy production, maintenance and construction of technological plants in the oil & gas sector, power and infrastructure.

Enrico Mattei is known for leading Italy into being a reference nation in Energy Policies after the Second World War, during the reconstruction phase.

Aroldo, can you tell us how your entrepreneurial role began?

Mattei's energy policy was based on the search for all the hydrocarbon resources needed for Italian development. Mattei, in addition to buying hydrocarbons, went directly to the Middle Eastern regions to drill and extract oil directly for his company and therefore for Italy. The reserves were therefore formed by direct purchase of oil and by extraction. Mattei's great innovation was to overturn all the agreements that the oil companies had entered until then (50/50) with the oil-producing nations. Enrico Mattei offered 75% to the producer country and 25% to ENI. In addition, he gave the opportunity to local operators to train at the College of Hydrocarbons that he had built in Metanopolis, transforming them into autonomous workers who would extract and manage oil for their nation. This intuition risked upsetting the world market and made him unpopular with the big oil companies.

Can you tell me anything about his personal quest to freedom?

Mattei was an active participant against Nazi-fascism. He became the leader of the Catholic anti-fascist formations and commanded about 80,000 partisans. He was also the deputy commander of the National Liberation Committee under commander Cardona. His anti-fascism beliefs were the result of deep convictions, linked mainly to the relations he had with characters of Milanese and Italian Catholic culture before the war, and in particular, relations with La Pira, Marcora, Boldrini, Fanfani and others that later formed, at the end of the war, the Christian-Democratic Party. His anti-fascism views were not simply linked to resistance but came from a deep conviction on which he then acted upon during his life.

How did his actions affect Italy's economic recovery?

His projects for the development of Italian society were projected towards the future, he had a vision that anticipated times. Unfortunately, after his death many of the projects, some already started, were set aside by his successors who brought Mattei's companies back under the auspices of politicians of that time who certainly did not have long-term strategic visions but were only interested in the immediate results and easy consensus. His influence in the economic and entrepreneurial renaissance after the end of the war was therefore enormous. He understood that there would be no development without having the energy resources necessary to recreate the socio-economic fabric that distinguishes a nation who wants to grow and prosper. The use of methane gas was the engine that drove the Italian economy to a tumultuous development that was called "the economic miracle", the result of ideas, capacity, and absolute dedication to his work. He also understood that only by having the opportunity to manage all energy resources could he realize the dream of making Italy a developed nation, free from foreign conditioning and in line with the most advanced nations in the world. The idea was realized in 1953 when ENI was formed, bringing together under a single group all the companies created by Mattei that were directly or indirectly linked to energy sources. "He had a dream": that the Italians were no longer identified as poor emigrants but that they were recognized for their high-level technical skills, entrepreneurship and respected for what they had managed to achieve. Mattei's death on 27 October 1962 in the Bascapè countryside left an important void in Italy’s economic recovery.

Enrico Mattei was born in the town of Acqualagna, in the Marche Region, but his life is indissolubly linked to Matelica, a city of ancient origin, located in the Province of Macerata.

At the beginning of the third century BC, the territory was affected by Roman conquest that led, around the middle of the 1st century BC, to the birth of the Town Hall of Matilica , whose name was inherited from the present Matelica.

The center assumes its maximum development between 1 and 2nd century. AD., as evidenced by the many monumental remains. The decay of the Roman centers between the 3rd and 4th centuries. AD. hits Matelica which, however, becomes a bishop's headquarters between the 5th and 6th centuries.

It was erected to an autonomus city around 1150, when the citizens replaced the Consuls to the Feudal accounts of the German Empire. Between 1170 and 1180 it was destroyed by Christian, Archbishop of Mainz, who worked in the Marches to restore the power of Emperor Frederick I. A new municipal autonomy was restored around 1210. In 1266, with the re-establishment of the papal authority in the Marca, Matelica passed under the direct dependencies of the Vatican. From the end of the 14th century it was subject to the Brass family,well-known papal vicars. At that time one of the main sources of wealth was the wool cloth factories. The industry, after returning in 1578 under the direct rule of the Church, decayed.

The city in 1610 was home to the Governor of Breve, but this privilege did not improve its industries. The French invasion and the struggles for national unity led to a complete decay of the wool cloth industry. It was not until the century just after the end that the economy returned to expansion. In the immediate aftermath of the war, new industrial factories were opened and a few years later, thanks to the presence of Enrico Mattei, important packaging and metal engineering industries were born. This new wealth has also benefited agriculture, which has specialized in viticulture, beekeeping and livestock. As a result the city grew and private construction came out of the old town and spread into the nearby territory .

Matelica is also home to a historical theatre that resembles one of the most beautiful and important theatres in Italy, the La Scala theatre in Milan. In Matelica in the heart of Maceratese, you can visit the Piermarini Theatre.

The architect Giuseppe Piermarini, after creating the sumptuous theatre La Scala in Milan, also worked in the Marche. When he was asked to design a theater for the city of Matelica, he relied on the project of the well-known Milanese theater to realize it. Precious frescoes, elegant decorations and excellent acoustics make the Matelica theatre, created in 1812, a jewel of Italian art and architecture.

The City is also known around the world for the production of Verdicchio wine. The peculiarity of Verdicchio di Matelica can be traced back to the territory and in particular, to the condition of a valley by the sea. This parallel positioning creates a continental climate, favorable to the wine quality. The production of Verdicchio di Matelica winds between Matelica (we are at 350 meters above sea level, the altitude already rises compared to the hills of the province of Jesi), Esanatoglia, Gagliole, Castelraimondo and Camerino (in the province of Macerata) and the countryside of Cerreto d'Esi and Fabriano (in the province of Ancona). It's all here the characteristic trait of this “mountain wine”.