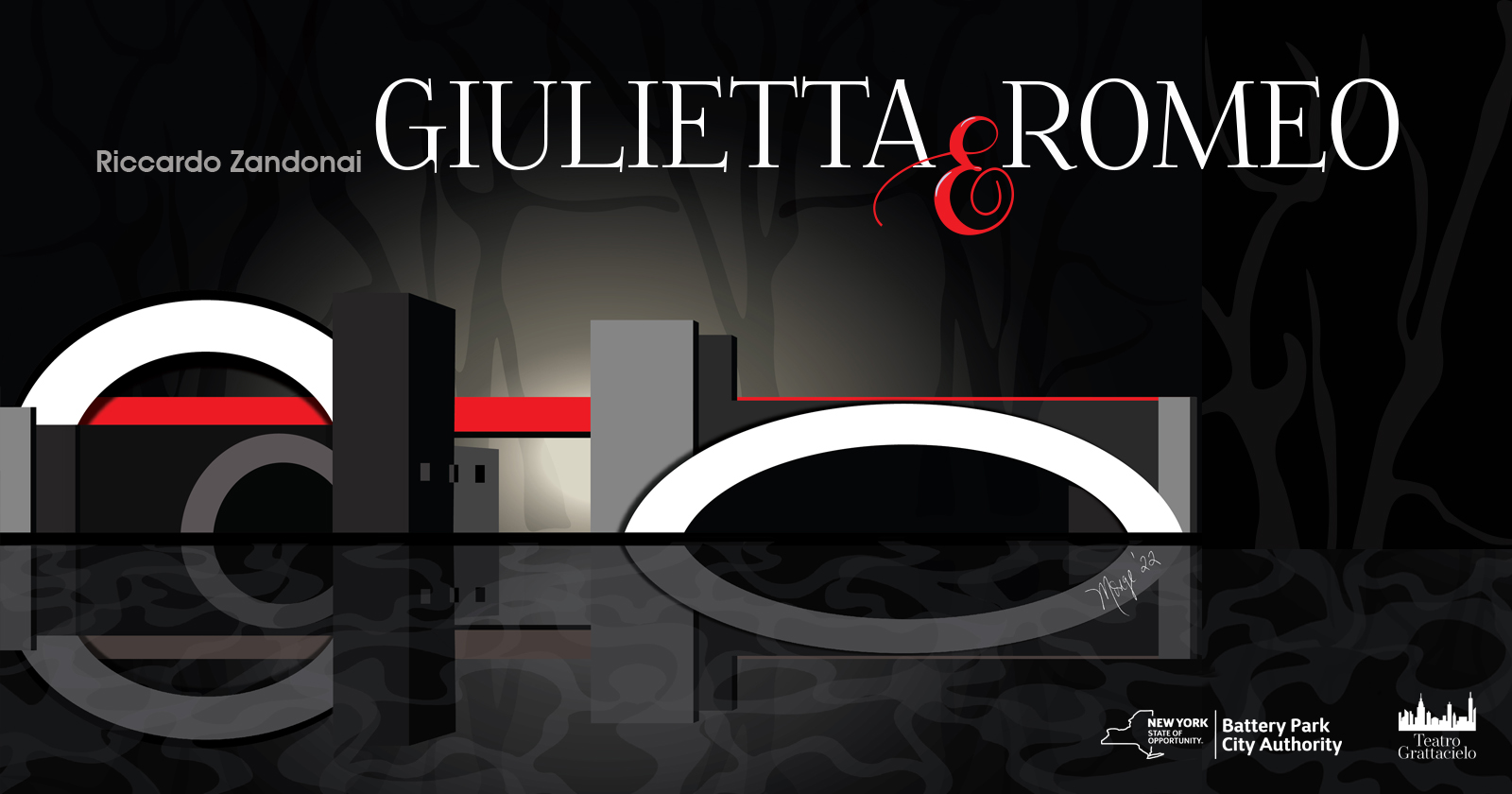 OPERA NEWS
NEW YORK CITY’S enterprising Teatro Grattacielo, dedicated to reviving the works of the verismo/Giovane Scuola era, has been expanding its artistic footprint. Until the Covid lockdown, they presented one concert performance per year. Since the reopening, they have begun staging their offerings, providing satisfying theatrical experiences despite limited means. But Grataciello is giving New York operagoers a taste of unjustly neglected repertoire that stands out from the surfeit of early music, Baroque, and early Classical works that are often the diet of the city’s smaller opera companies. On June 4 under the stars in Battery Park, at the tip of downtown Manhattan, the company unveiled the New York City stage premiere of Riccardo Zandonai’s Giulietta e Romeo.
The work had its premiere at Rome’s Teatro Costanzi in 1922, conducted by the composer and showcasing powerhouse verismo stars Gilda dalla Rizza and Miguel Fleta in the title roles. Though it was not critically beloved, it enjoyed a certain degree of audience success, mostly in Italy and South America. The libretto by Arturo Rossato was inspired not by Shakespeare, but by Italian historical sources. The Capulet and Montague parents are absent, as is Juliet’s nurse, replaced here by her friend and handmaiden Isabella. Romeo and Giulietta’s romance has already begun before the curtain rises; their first scene together, midway through Act I, is a feverish love duet. Although Zandonai’s score is not quite as melodically memorable as his earlier Francesca da Rimini, it certainly displays his talents as a master of orchestral color. Though unmistakably Italian in nature—including the evocative use of some ancient instruments appropriate to the setting—the music has tinges of Debussy, Wagner, and Strauss. It’s all deftly woven by Zandonai into a cohesive and dramatically effective whole. Conducting a reduced orchestra of thirty-one pieces, Christian Capocaccia displayed clear fondness and understanding of Zandonai’s style, and he shone particularly in the opera’s highlight: an orchestral interlude depicting Romeo’s frenzied horseback ride through a storm to Verona when he believes Giulietta has died. (Capocaccia and his cast had to contend all night with a murky amplification system, low-flying helicopters, and chattering audience members, and they did so valiantly.)
As Giulietta, Greek soprano Eleni Calenos sang with a strong sense of phrasing and verismo style, and she acted the role with compelling intensity. There was real chemistry between her and her Romeo, Matthew Vickers, whose beautifully produced lirico-spinto was a pleasure to hear. Both of these roles are strenuous, requiring great stamina and extremes of range; that Calenos sometimes sounded stretched in her uppermost register was not surprising. Tybalt (here Tebaldo) is the villain of the opera; his part is a large one despite his death halfway through, and he spends most of his time condemning and hectoring. Baritone Franco Pomponi is a stagewise veteran who acted the part believably, but he sang with unrelenting force that showed little in the way of dynamic shading and exposed a hard beat in his voice. Tenor Spencer Hamlin made a fine impression in the cameo role of a minstrel, and Melina Jaharis unveiled a lush mezzo as Isabella. Tenor Diego Valdez learned the role of Gregorio on only a few days’ notice and sang it with proficiency. Francesca Federico sang one of the briefest comprimario parts—that of a prostitute—with such strong presence and beauty of tone that she left one longing for more.
Grattacielo’s general and artistic director Stefanos Koroneos served as director, using the small outdoor stage to maximum effect and drawing committed performances from his cast. His strong stage sense made his decision to use projections designed by Camilla Tassi seem odd; they were superfluous, and at times intrusive. Set and costume designer Tasos Protopsaltou favored black as the color scheme and it worked, producing an effect that was simultaneously stylish and doom-laden, heightened by Lance Lewis’s lighting.
There was a credit in the program for supertitles; somehow, these never materialized, although they would have been helpful to an audience that was experiencing this work for the first time. —
Eric Myers

OPERA, UK
New York
Teatro Grattacielo, New York’s specialists in the veristic and post-veristic repertory, are trying new venues and approaches. June 4 brought the first of two outdoor performances (in Battery Park, at the southern tip of Manhattan) of an obscure work in its first local fully professional staging: Zandonai’s Giulietta e Romeo, premiered in Rome in 1922. The score—short of melodic inspiration but full of postWagnerian and post-Debussian atmosphere—has some effective orchestral passages and is strongest in the string writing. As in Francesca da Rimini, his best-known opera, Zandonai employs archaic instruments to convey a sense of the story’s antiquity. Structurally, the forthrightly bodice-ripping libretto bears some similarities to that for Bellini’s Capuleti: we don’t see the lovers meet (they are already pledged in marriage) and many characters employed in Shakespeare’s version are absent—including, strikingly, the entire older generation. Only Tebaldo (Tybalt) speaks for the Capulets. Verona’s laws intrude via a town crier (banditore) who is somewhere between Wagner’s Nightwatchman and Puccini’s Mandarin.
Teatro Grattacielo’s valiant effort had to contend with the usual perils of outdoor urban opera—inopportunely timed helicopters and party boats, crying babies, passing police sirens—as well as the staggering distraction of New York Harbour on a lovely moonlit evening, and amplification that monkeyed with Zandonai’s frequent offstage choral writing. But the dynamic conductor Christian Capocaccia and a committed cast and orchestra put something across, holding the attention of several hundred people despite the challenges. Stefanos Koroneos’s production told the story clearly, with logical blocking in a cramped space that nonetheless allowed for balcony scenes and convincing stage combat. Tasos Protopsaltou’s largely black-and-white costuming succeeded; the company again overdeployed video projections, to little positive effect.
At the opera’s premiere, Zandonai entrusted the roles of the lovers to internationally prominent verismo interpreters: Gilda Dalla Rizza, Puccini’s late-career muse and the creator of Magda in Rondine, and the tempestuous Spanish tenor Miguel Fleta, who two years later would be the first Calaf. Fleta left an impassioned recording of ‘Giulietta, son io’. The roles exert superhuman demands. Despite a few high notes not squarely on pitch, Eleni Calenos (Giulietta) affirmed her affinity for verismo style, impressing with her textual projection and vocal power, singing with a penetrating chest voice and a rich, liquid middle register. As Romeo, Matthew Vickers displayed convincingly Italianate timbre capable of squillo but also a full range of dynamic shadings and remarkable stamina in the high tessitura. Franco Pomponi’s experience as Scarpia and Rance told in his hectoring, full-tilt vocalism as Tebaldo; he commanded the stage. Spencer Hamlin has forged a fine career juggling leading and character tenor roles; he rose to the mournful music of the Ballad Singer who all but hijacks Act 3’s first scene. At short notice, the tenor Diego Valdez learnt and sang Gregorio very creditably. Francesca Federico’s rich soprano and presence had such impact that one wished her part (‘Una donna’—here a spirited sex worker) had been longer.
David Shengold